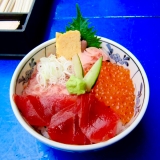 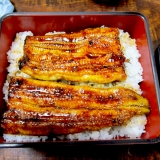 We have taken a very long hiatus…partly because I went to JAPAN for TWO WEEKS!  I was fortunate to travel with my brothers and foodie friends who eat as much as, if not more than, I do.  Our goals: (1) eat at Sukiyabashi Jiro; (2) eat tons of ramen; and (3) eat everything else in sight.  Mission accomplished.  And now, a select photo series of our adventures…

Sea grapes! I’d never seen these before.  They tasted like teeny bubble wrap full of saltwater.  @ Tingara, an Okinawan izakaya.

Oh man, were we nervous to be at Sukiyabashi Jiro (the younger son’s branch) of “Jiro Dreams of Sushi” fame.  An American tour group left as we were waiting, saying in hushed voices, “That was DIFFICULT,” and “What was he SAYING?”  Apparently, they had been shooed out because a few of them had left sushi on their plates — a terrible insult, duh.

I didn’t take pictures of the sushi — you can just watch the movie or Google image search for better photos than I could take.  But we had 21 delectable pieces of sushi each: hirame, ika, big scallops, akami, chu-toro, toro, uni, katsuo, anago, small scallops, akagai, kuruma-ebi, kani, clam, kohada, aji, shimesaba, shako, ikura, flounder fin, tamago.  After the fourth, our brains went to La La Land from all the deliciousness, so we couldn’t remember the order of the tasting menu.  In particular, I recall how the fatty tuna and anago dissolved on the tongue — it melted away faster than butter.

The chef was surly at first, but he warmed up to us.  In fact, he even followed us out and chatted for a long while about his work and life philosophy! 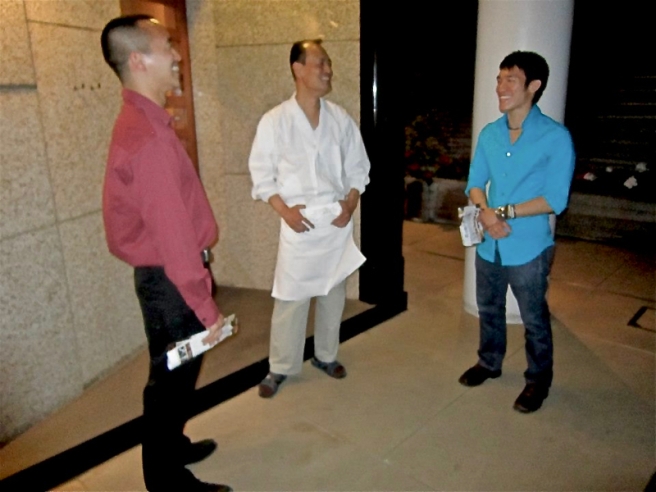 A trip to Japan is not complete without a visit to a maid cafe.  Even though it might leave your soul feeling a little the emptier, your parfait will be ridiculously cute.  Or kawaii.  Or whatever. @ Maid Cafe Maidreamin. 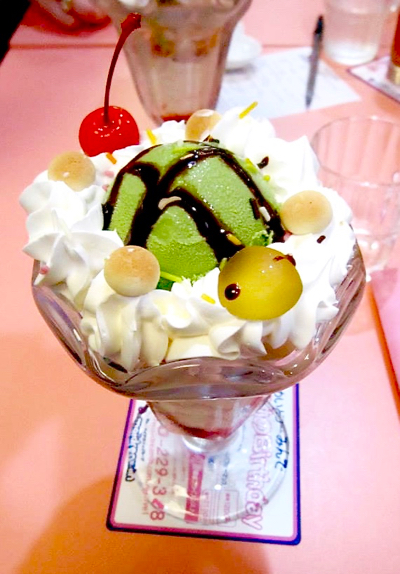 Lookit that GORGEOUS MARBLEDNESS.  Some of the best beef we’ve ever had! 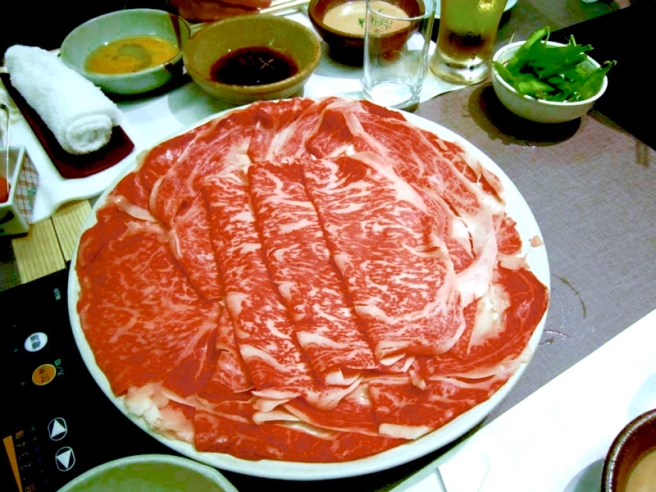 We ate the beef in sukiyaki and shabu shabu, prepared for us by attentive kimonoed ladies.  We were a long way from Swab World.

At the food stalls outside Tsukiji.  This tuna/salmon roe/fatty tuna+green onion bowl is 1200 yen (about $12) from Tsujiki Donburi Ichiba.  I went back for this twice more.  We learned from Takashi the sushi master that you have to be very careful when you cut salmon roe from the sac — if it’s done poorly, bile seeps all over it and you have to cover up the taste with a lot of salt.  The salmon roe at Sukiyabashi and Tsukiji is not salty, and it doesn’t leave a fishy taste in your mouth.

At Inoue, a ramen stall in Tsukiji.  This was our favorite ramen in Japan — simple, straightforward, shoyu broth, 650 yen. 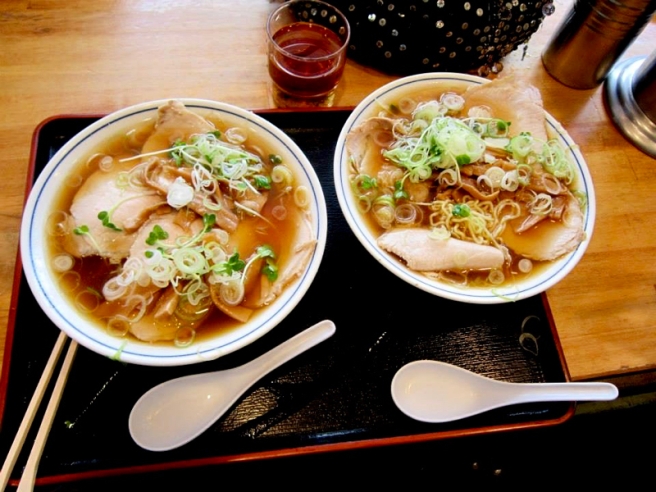 These are the Inoue ramen men.

Hand-cut noodles and niboshi broth distinguish Nagi’s ramen.  The whole egg was sure delicious too.

You know what else Japanese people do well?  Pasta.  This was fresh spaghetti with bacon, mushrooms, soy sauce, and butter, topped with seaweed.  For 980 yen at Pizza King Bambaru.

Tonkotsu ramen at our cousin’s favorite, Ippudo.  (Apparently, they opened a branch in NY that’s not half as good.)

Out in the country in the little town of Shimoda.  At Gorosaya, a critically acclaimed seafood restaurant.  These giant shrimp were still flailing their little legs about (my aunt is imitating them) as we ate the meat off of them.  We felt like barbarians, but the sashimi sure was sweet.

Shimoda is known for their kinmedai, a soft, white fish.  Mmm, lookit all that fat.

At the end of the meal, the giant shrimp comes back out, cooked in the miso soup.

This is chicken sashimi.  I decided to ignore all of my American-born fear of salmonella poisoning and ate it.  It was ultra-tasty.  Just like very good fish sashimi.  @ Bochi Bochi, an izakaya in Shimoda.

Yes, they’re just sandwiches, but they were amazing!  The egg was so soft and fluffy, and the ham/tomato/cucumber had wasabi mayo on it.  @ Hiranoya, a traditional diner in Shimoda. 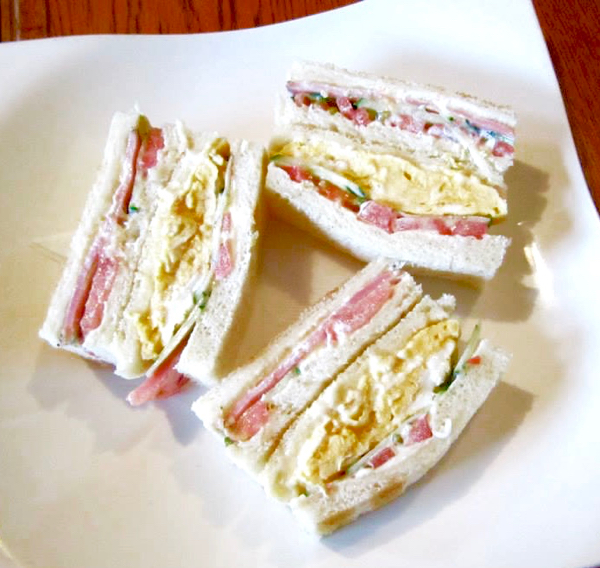 Our mom’s hometown, Kawazu, has very clean rivers, which means they have the best unagi around.  Here is the menu at Manryo.  Three items: unagi over rice, rice between a double-layer of unagi, or rice with unagi on the side. 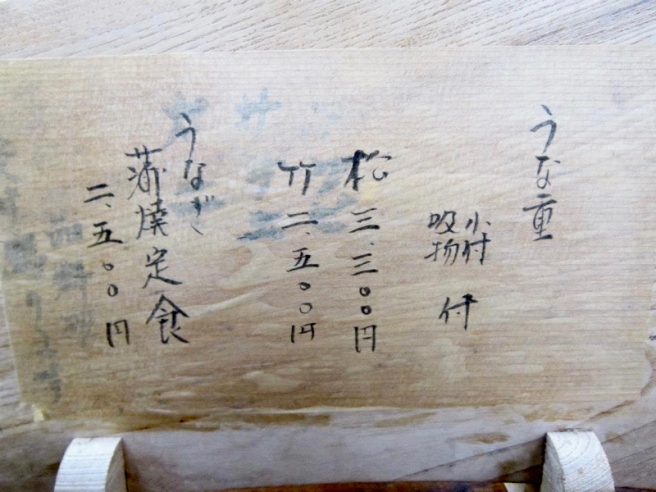 And here it is: one of my favorite meals in Japan.  Eel usually tastes at least a teeny bit like mud to me, but not this!  It is crisp on the edges.  The skin melts in your mouth.  The meat is fresh and tender.

Japanese cakes are so adorable!

And now I can’t eat at a Japanese restaurant in San Diego for a while. At least a month, maybe two.

We are eating at every restaurant on Convoy Street In San Diego. In order.